It seems like the tarot card for the month of Sivan ( סִיוָ) should be the Tower because life is changed forever with the covenant at Sinai, but it’s not.  The card of the month is the Lovers, but when you think about it finding your soul’s other half, is a pretty life altering experience too.  In some cases this may be a lover, or a Bashert, but sometimes it’s a person put in our lifes that is our polar opposite.  Judaism is rife with polarizing siblings or other-halves that, like magnets, repel a person in the other direction even if they are really our other half. This person is always one that helps to reveal more about ourselves than any other person in our life. This corresponds to the Mazal for the month, Te’omim (תְּאוֹמִים) – the Twins 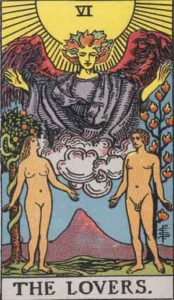 The tarot card for the month is the Lovers.  On one side of the card you  have Eve with the tree and snake, on the other side you have Adam and a burning bush.  In the middle of the card is mountain and a rainbow-haired angel with its arms reaching to bring the two people together. The angel, which many traditions say is Raphael is healing the rift between the two people and brining them together.  In this we can see that love should be about healing, but sometimes we need a hand getting there. The number assigned to the card is six, which is also the sum you get when you subtract the linear month from the torah month (9-3).

The hints of “revelation” in the Lovers leads us to Shavuot

(שבועות).  Shavuot is the holiday of revelation and first fruits.  Agriculturally we are harvesting the first fruits of the year, and spiritually we are receiving the first fruits of our tradition — the ten commandments.  Some believe that the entire torah was received on Sinai, but my read of the scripture is that it was the ten commandments.  Tradition also tells us that each person heard Gods voice her/himself in the way that was right for them.  Shavuot is truly the birth of the Tribe of Israel as a people – or the beginning of the tribe’s “marriage” to God.

The Torah portions around this time really are the story of a relationship.  They go from the bride getting cold feet at Mt. Sinai (think about the Golden Calf) to the joyous wedding to the first fight between the couple (the “grumblings”) and the setting of ground rules for how the couple will live out their lives.   There are several Jewish traditions that call the Tribe of Israel the bride of God, and its easy to read this month’s portions and watch the journey of this relationship unfold.

The tradition of eating dairy products on Shavuot often seems incongruous, but I think the simplest answer is from our agricultural heritage.  This month would be when traditional cultures would begin milking cattle, goats, and sheep for the summer.   According to Jessica Prentice, in her book Full Moon Feast: Food and the Hunger for Connection

, points out that this is the time known as the Milk Moon for just this reason.  In The Rosh Hodesh Table: Foods at the New Moon

by Judith Solomon, it’s pointed out that Chalav, the Hebrew word for cheese, has the numerical value of 40.  This is the same length of time that Moses stayed on Mt. Sinai to receive the ten commandments.  This is just one of the connections that the rabbis have given us for the tradition of dairy on Shavuot, but the agrarian connections truly make the most sense.

One last correspondence to explore is that of the letter Zayin

(ז), which is associated with this month.  It seems odd that it is the letter Zayin, which has a numerical value of 7 (שֶׁבַע), is associated with the month instead of Tet (9) or Gimmel (3).  But, with a little deeper digging the reasons for the Zayin become clear.  There are 49 days between Passover and Shavout, which is 7 weeks of 7 days.  Really, the letter for the month has more to do with Shavuot than anything else.  The letter Zayin

also symbolizes becoming a vessel for God’s blessing and sanctity which is what happens to the Jewish people on Shavout. It is also not insignificant that there are 7 prophetesses acknowledged in Judaism and that the prophetess is the Netivah of the month, which is why I created the Shavuot Seder of the Seven Prophetesses.  Sevens are a hugely important number in Judaism, a quick thought and you can probably name at least seven important sevens!

7 Replies to “Sivan: Revelations in Relationships”