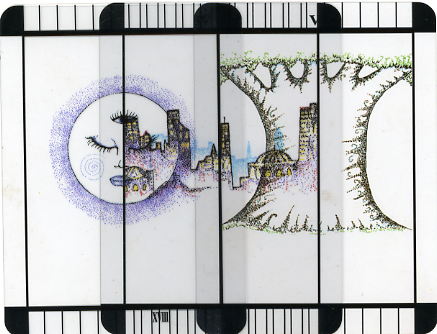 With Nisan we leave the lunacy of Adar behind.  Rosh Chodesh Nisan is the New Year of Kings, so it makes complete sense that the Emperor (קֵיסָר) is the card for the month.   In the Transparent Tarot, the image is of a city.  It is the man-made world, well organized and structured. What does this mean for us?  In Nisan, we are challenged to once again leave slavery behind us and take responsibility for our lives.  In Egypt we built cities for Ramses with nothing gained for ourselves — not even a decent meal.  The Emperor reminds us that now we are responsible for ourselves and the cities we build.

The Emperor in the Waite-Smith Tarot sits on a throne with rams’ (טלה) heads as ornaments and wears a garmet with a rams’ head on it.  The throne is solid and stable, and under the cloak with the ram’s head on it, he wears armor.  This image reminds us of the interconnection of the ram and the Jewish people.  In his writings on the shofar as spiritual practice, Michael Chusid says:

“A totem is a symbol, usually an animal or other natural  object, used to signify a tribe or group of people. More  than just a mascot, emblem, or iconographic  signature, a totem embodies a tribe’s self-identity. It  carries the tribe’s spiritual energy, informs decisions about behavior, and often acts as an intermediary  between a people and its god or gods. Jews do not erect totem poles like those of Native  American tribes in the Pacific Northwest; our biblical  proscription against graven images is too strong to  allow that. Yet our totem is alive and well and deeply  rooted in our history and liturgy; our totem is the sheep; more specifically, the ram. ” (Hearing Shofar, Book 3)

He goes on to discuss that astrologically the Age of Aries is considered by some to have begun around the time the Exodus that we commemorate with Passover is supposed to have happened.  Moreover, the Age of Aries replaced the Age of Taurus — giving new meaning and dimension to the story of the Golden Calf.  The Emperor of the Waite-Smith deck reinforces that this is the month were we became a true people, called together under a common banner and responsible for ourselves and our own existence in the world.  How do the Emperor and Maiden come together in the same month?

Take a look at the astrological symbol for Aries (on right).   It’s also a symbol for female reproductive organs if you just look at the imagery.  The Ram that is the strength of the Emperor is also the potential life giving force symbolized by the Maiden in menarche.

Once we understand this, we can move into the month of Iyar and meet the High Priest, the Kohen Gadol (כּוֹהֵן גָדוֹל), to understand the faith of our people.  Following the Exodus the battle over who speaks for G!d(dess) is a major theme of the Torah portions.  We must connect with the High Priest as holder of the tradition, before we can stand at the supernal chuppah in Sivan and be wed to YHVH through the revelation at Sinai on Shavuot (Lovers is card of Sivan).

One Reply to “The Ram’s Head of Nisan”