After ten years and with this 570th post, the pomegranate has been peeled.

It is so hard to bring to an end something you have put so much energy into, but to make space for what is trying to be born.

I’ve refashioned this site several times, and it’s grown with me over the years.

I’m planning to leave the content up, as it’s a body of work I’m really proud of.  And I’ll still respond to comments, if people choose to share them. But I’ll no longer be updating the site.  I’m still deciding if I’m going to weed out some of the posts and just leave the best —

But there is something really nice about the number 570.
I’ve learned that it is the gematria equivalent of the words “It shall be a Jubilee unto you” (יוֹבֵל הִוא, תִּהְיֶה לָכֶם)(Lev 25:10)

The Jubilee was the epic time of return and renewal in ancient Judaism, when land returned to its original owner and slaves were set free.

As winter turns to spring, and new life appears…

Something new is waiting to grow.

The pomegranate is peeled.

Thank you for all the support over the years.  I look forward to sharing whatever is next with you all. 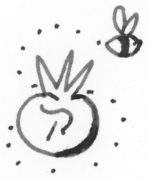 Update:  As of May 2017,  there are no longer 570 posts. The content has been culled down to hopefully the best of the best.